Review and Spotlight of The Evolution of Gods by Ajay Kansal

Book Details:
Title and Author: The Evolution of Gods: The Scientific Origin of Divinity and Religions 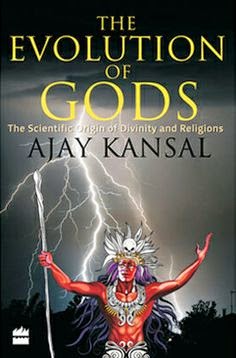 Religious scriptures the world over claim that one or the other god made all plants and animals, but science has not yet identified any supernatural power that created and governed living beings.

Was it man who came up with the idea of gods to help him cope with his own fears?
Could it be that ancient people attributed natural phenomena-unfathomable and frightening to them-to the working of invisible gods?
What kind of sufferings or fears made people bow before unseen powers or gods as we call them? When were these gods created?
Who invented morals and methods of worship?
Who wrote the ancient scriptures such as the Bible and the Vedas?
Most crucially, have gods and the scriptures shaped our responses to the world around us?

The Evolution of Gods seeks to answer these questions, and explains scientifically how, when and why religions and gods came into being. Ajay Kansal marshals anthropological and historical facts about the development of religions in a simple and straight forward manner to assert that it was mankind that created gods, and not the other way around.

The Evolution of Gods is an in-depth nonfiction on why Man depends on God, and the author takes pains to describe our history in depth from all over the world by going back centuries. It was a good revision going down our chronicle of events, which began with the essence of life and death of the man and then introduction to God, which gave birth to various religions. However, I felt that there was no scientific explanation to the origin of divinity since all information laid in this book was about history and plain history!

The Author could have taken us on the road towards man's sheer existence by making him peep within him. It could have been a book about a message of consciousness and awareness rather than making the reader just go peep into our bygone times.

Although I commend Ajay's deep rooted research into the topic of how the word, "God" evolved, and got it's different names, I would give it a 3.5 stars.

Ajay Kansal is a professor and consultant pathologist. It was during his medical practice that he encountered human suffering in a big way that made him question the concept of Gods and drove him to write this book.
The Evolution of Gods

is his first book and the only book written by an Indian author on the concept of the existence of God which talks of all religions and is not based on any one particular form of it. His next work is a romance which is currently in progress.