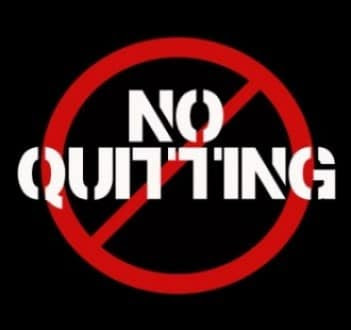 Lately, this has become a popular song amidst the youth thanks to Justin Beiber. My son seems to be humming it and thought what better way to express the deep idea beneath his clear statement.

Infact, when I was a kid; I used to hear my Parents say: Chin up!!

My Question would be: Why?

Answer would be:-- Being negative about anything will not solve any problems.

Looking back when I was young and fragile and had just entered my teens, and when I did not get into a school of my choice. I was so dis-heartened and had lost all interest pertaining to educating myself. My parents often used to ask me to chin up 'cause you never know destiny has something else planned for you. I would be just rolling my eyes and as today's generation says; "whatever". I promised to keep a positive attitude.

But, they were right. It did happen thanks to their preachings and me keeping a positive attitude.

I think this is an exceptionally good mantra. Never say Never!

It is a Negation statement but brings out the Affirmation of the whole message! It so typically suits our generation who loves negativity and finds it extremely fashionable to be surrounded by it. It sure makes them feel hep on breaking boundaries and yet trying to convey a positive message.

So, just as the youth of today is humming; I plan on humming myself so that I am surrounded by the affirmative "message" of this statement/song.

NEVER SAY NEVER!!
Posted by Ruchira Khanna at 10:01 AM

Such a wonderful message!!

I have to go with majority on this and totally agree this is a great message :)