Spotlight and Review of From An-other Land by Tanushree Ghosh

check out the schedule here

From An-Other Land
by
Tanushree Ghosh 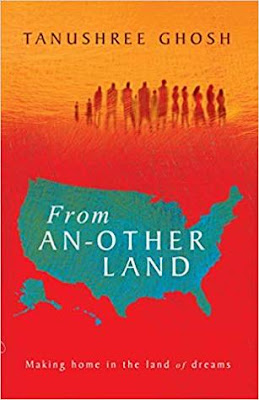 Never has been the conversation on immigration more pertinent than now, post 2016 US elections. From cancellation of refugee protection and zero tolerance to undercurrent crackdown on H visas, the resurgence of nationalism is hitting the globalized population head-on.

But what is immigration today? A question of life or death - fleeing of persecution? A compulsion? Or a mere pursuance of privilege?
And what is the US today? A land of opportunities? Or a quagmire impossible to comprehend, inherently racist and selfish?

From An-Other Land dives deep into immigration today for the Indian diaspora and its many facets with characters who seek to define themselves in an intercultural setting that is less and less sure of itself. A reality check and a guide for anyone who wants to understand the modern-day US.

From An-other Land is a book of many stories of a handful of characters that have immigrated to the USA. She has portrayed their individual lives and their challenges.

The book starts with some characters taking the international flight as they form a line towards customs and check-in. The scenario was gripping and realistic as the many emotions surface for such individuals boarding a flight who plan on making a home away from their homes. The author well captured the anxiety and the uncertainty prevalent.

Once landed the author then delves into the lives of each immigrant as he/she finds a place for themselves on the foreign soil. The characters are well defined as they try their best in becoming a somebody from a nobody. Plots that have been burrowed into are classic cases of immigration; such as the story of Meera, an ex-sister-in-law married to her brother-in-law. A cultural conflict of an Indian wanting to commit to an American. A young lady is making amends with her emotions as she wants to make her home as cozy as her home far away. A father who goes missing in India, and the emotional turmoil the son is facing while living in the US. The ambition to be a somebody but the marriage is falling apart leading to a fallout of the individual. However, I could not empathize with their struggles and their hardships. Maybe since the author would abruptly change gears within the story.

The stories of these characters are woven exquisitely allowing the reader to see all the shades of life: happiness, sorrow, hope, love, lust, success, suicide, and death. The author has written all her stories being unbiased, and nonjudgemental. She leaves stories with no conclusion allowing the reader to make her call on how the characters will turn around. Will Tarun come back and ask for Michelle's hand after seeking blessing from his parents? Will Meera ever get to see her husband? Will Raji be happy in her home? These are some of the questions the reader gets to foresee the ending based on her knowledge and expertise.

Tanushree Ghosh works in the technology sector in the USA and is also a social activist and a writer. She has a Doctorate in Chemistry from Cornell University and has worked at the Brookhaven National Laboratories and is an alumnus of IIT Kanpur and Presidency College Calcutta.

Her blog posts, op-eds, poems, and stories are efforts to provoke thoughts, especially towards issues concerning women, social justice, and immigration - which is the topic of her first solo-author work From An-Other Land published by Readomania publishing.

As a contributor to the Huffington Post US, she has published several posts on topics that affect the under-represented and the lesser privileged, whether that's a population, a nation, or an individual. Her first article for the Huffington Post went viral and was picked up by the Yahoo news. She has since written on the Syria war and its children, open borders, the unfair coverage in the Western media of the Brazil Olympics, societal differences in outlook on issues like gun control in the US, and off-course - women. She has written on postpartum depression, acid attack and its state globally, #MeToo and a myriad of related topics and was interviewed for Reddit and the Indian Express. She is a regular contributor to several popular publications (incl. The Tribune (Sunday Diaspora segment), Thrive Global, The Logical Indian, Youth Ki Awaaz, Café Dissensus, and The Women's Web). Her literary resume also includes poems and stories featured in national and international magazines, including Words Pauses and Noises, UK; TUCK, Glimmer Train honorable mention, and inclusion in seven anthologies (through winning national and international contests), including Defiant Dreams (Oprah 2016 reading list placeholder) and The Best Asian Short Stories 2017 (published out of Singapore by Kitaab). She has served in coordinator and chapter head roles of ASHA and AID India and has affiliations with several women's organizations and non-profits. She is also the founder and director of Her Rights (www.herrights.website), a 501(3) c non-profit committed to furthering the cause of gender equality and supporting victims of gender violence.

Click here to check out all the titles by the author...

You can stalk her @

Posted by Ruchira Khanna at 4:26 PM

Email ThisBlogThis!Share to TwitterShare to FacebookShare to Pinterest
Labels: Blogtour, from another land, tanushree ghosh, TBC