Book Review of Sands of Time by Neelam Saxena

Blurb
'SANDS OF TIME' is a collection of twelve interesting stories which bring out the different moods and moments in the lives of women.
Watch it

My Review
Sands of Time is a collection of powerful stories by Neelam Saxena.

All these stories have one common body, a woman! All the women of her stories are either the victims or the guardian angels that help save the day or the knight in action. Thus, the author compares this lady to aqua since just as water takes the shape of a container and carries forth, this matron is versatile in spite of being talented and accomplished. She embraces whatever comes, and carves a path around it thus, making sure to inspire and exhilarate beings along the way.

Such is the power of a woman!

The author has tackled all the arenas where the woman is battered ever since she is born. Her birth, her sacrifices more so since she is the weaker gender, the concept that she is the giver thus, the chances of prosperity come via her, her marriage and her sacrifices to embrace what may, her being battered since she is known to heal thyself and come out of the dark tunnel naturally. The stories that Neelam etched were no doubt heart wrenching but then as a reviewer I wanted more twists and turns to it more so to keep me intrigued and engrossed. No doubt, the discrimination, injustice, and abuse of thy woman was beyond acceptable and has never been tolerated by a respectable citizen of any country.

There were some stories which started off very well such as "The Wings of Hope", " Hangover", "In the Killer's Hands", "SandClock." but lost the intensity mid-way.

Some stories in The Sand of Time made me pause on the complexity of the woman. Reflection from the Past kept me engrossed and curious on why and how Nivedita's son, Niteesh was being harmed. The end was chilling!

The author has tackled an issue that is centuries old, yet tough to bring out the magma of this subject since the woman is a synonym of atrocity, kindness, and gentleness. So, to put out the twist and turns while keeping the matter critical needs just the right pinch of lemon and salt to bring out the tanginess yet keep it crisp and full of flavor.

Some Facts About the Author 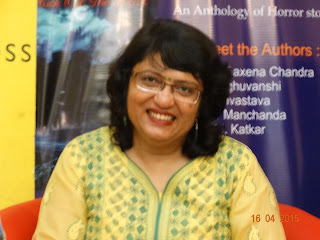 NeelamSaxena Chandra, an author of thirty-two books,is a record holder with the Limca Book of Records for being the author with highest number of publications in a year in English and Hindi (2015). She works as Joint Secretary (U.P.S.C.).  She has won award in a poetry contest by American Embassy, Premchand award by Ministry of Railways, Rabindranath Tagore international poetry award, Freedom award by Radio city for her lyrics. She was listed in the Forbes list as one of the most popular seventy eight authors in the country in 2014.
Awarded by eminent poet/lyricist Gulzarji in a Poetry Contest organized by American Society on the topic ‘Poetry for Social Change’.Received the Rabindranath Tagore International poetry award -2014Awarded PremchandPuraskar by Ministry of Railways (II prize)Awarded by Children Book Trust, India in 2009.Neelam also debuted as a lyricist in Shankar Tucker's composition 'Mere Sajan sun sun' and the song has won the 'Popular Choice' award  in Folk Fusion category in Radio City Freedom Awards.Neelam is a record holder with Limca Book of records for highest publications in a year in English and Hindi.Neelam and her daughter hold record for being the first mother-daughter duo to write a poetry book for the book 'Winter Shall Fade' in Limca Book of Records, Miracle World Records and India Book of records.


This Tour is Hosted by

We Promote So That You Can Write

- See more at: http://dealsharingaunt.blogspot.com/2016/02/sands-of-time-by-neelam-saxena-chandra.html#sthash.Qy1PltP7.dpuf
Posted by Ruchira Khanna at 10:43 AM